The history and goals of the Polypay sheep breed

As stated in the APSA bylaws, the goal of the association is "to increase production through selective breeding and to develop through accepted practices a breed that will maintain high production through increased fertility, high carcass quality, a quality fleece, functional conformation, hardiness and a good disposition." The history of the breed and the characteristics we seek to preserve in our standard emphasize this goal.

The Polypay breed was born out of frustration and a dream. Long-time Idaho sheep man Reed Hulet was frustrated with the production of his family's 600 Idaho range ewes. They needed more productive sheep to make a profit. His dream - to develop a more prolific, better milking and mothering breed of range and farm combination sheep by cross breeding the best sheep available, and selecting for prolificacy and other economic traits. Reed Hulet did not have the resources to develop a new breed of sheep, so he shared his dream with his brother, Dr. Clarence Hulet's experimental breeding plan to reduce breeding seasonality and enhance prolificacy was approved. The dream to produce two lamb crops and one wool crop per year to give sheep producers more profits was on its way to reality! 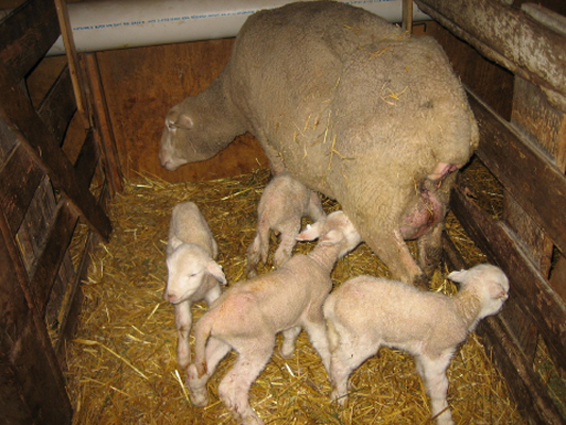 In 1968 USSES crossed the first imported Finnsheep rams on Rambouillet ewes. Large-bodied Dorset rams from North Carolina, California, Oregon and Montana, born as twins or triplets from ewes with outstanding lifetime production, were obtained and crossed on Targhee ewes. The foundation Rambouillet and Targhee ewes were developed by mating two rams of outstanding body size and born and raised as twins on the range. The Finnsheep x Rambouillet (F x R) and Dorset x Targhee (D x T) born in 1969 were big and exhibited early puberty. The F x R lambs were crossed with D x T lambs to produce the first 4-breed composite in 1970.

Subsequent testing of breeds and crosses established that the 4-breed composite (F x R x D x T) most closely met the prescribed production goals. When the potential of the new composite breed was recognized, Dr. Hulet coined the name "Polypay" in 1975 from "poly" many much or many, and "Pay" to indicate return on investment and labor.

Even before the name was adopted, information on the outstanding performance of the new 4-breed composite spread and interest grew rapidly. Surplus F x R, D x T crosses, and 4-breed composites were purchased at the Annual USSES Sales 1971-1974 by early Polypay breeders such as George Nicholas, Don Torrell, Rodney Peterson and Reed Hulet. The first "Polypay" ewes and rams were sold 1975-1977 to George Nicholas, Jack Ryan, Reed Hulet, Russel Beattle, Kermit and Sandy Petersen, Charles Kimball, Hall Schulthies and others who shared an interest in developing a more productive breed. The American Polypay Sheep Association was formed in 1980.

Since that time, research at the USSES has continued. And, hundreds of enthusiastic dedicated Polypay breeders on farms and ranches from Canada to Mexico and throughout the United States have obtained foundation stock from the USSES or descendants of that stock, and are contributing to the continued development of the Polypay breed.

Pride in their work insures a great future for the breed of tomorrow, here today. POLYPAY made in the USA!!